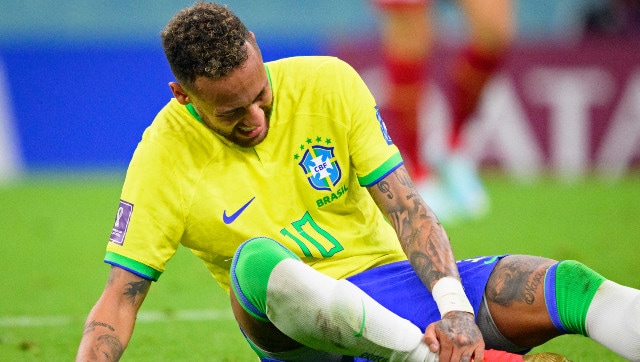 Neymar Jr clutches his right ankle during Brazil’s opening game of the 2022 FIFA World Cup against Serbia at the Lusail Stadium. AP

Doha: Neymar will miss Brazil’s second World Cup match but will remain with the squad undergoing treatment for his ankle injury, the team doctor said Friday.

Rodrigo Lasmar said tests conducted on his right ankle showed that Neymar has a ligament injury and will not be fit to play against Switzerland on Monday.

“It’s important to remain calm, an evaluation will be conducted daily so we can have more information and take the most appropriate decisions,” Lasmar said, adding that “the goal is to have him recover” in time to still play in the tournament.

Lasmar did not give a timetable for Neymar’s recovery. He said the situation of defender Danilo, who has a left ankle injury, was similar to Neymar’s and he would also miss the game against Switzerland.

Neymar was receiving treatment at the team’s hotel Friday after getting injured in the 2-0 win against Serbia in Brazil’s opener.

The Paris Saint-Germain striker sprained his ankle in the second half of a bruising match against Serbia on Thursday. He was in tears while sitting on the bench with ice around his ankle and limped off the field on his way to the locker room.

“Difficult game, but it was important to win,” Neymar said on his social media accounts not long after he left Lusail Stadium without talking to the media. “Congratulations team, first step taken. Six more to go.”

RELATED  Iga Swiatek in 2022: Two Grand Slam titles, 37 match winning streak and World No 1 ranking to seal it off

In an Instagram story after the match, Neymar posted a text that mentioned the need to “have faith.”

“You can be sure that Neymar will still play in this World Cup,” he said after the match. “I’m certain about that.”

Neymar was substituted in the 79th minute, about 10 minutes after hurting his ankle while being tackled by Serbia defender Nikola Milenković.

Neymar had already been tackled many times before during the match, and was seen grimacing and limping a few other occasions. He was fouled nine times, the most of all World Cup players after the first round of matches in the group stage.

“We’ll remain upbeat, it’s the characteristic of this team,” Brazil goalkeeper Alisson said. “These adverse circumstances will only make the group stronger.”

If Neymar can’t play, his replacement would likely be Rodrygo, who came in as a second-half substitute against Serbia on Thursday.

The 30-year-old Neymar was also hurt at the 2014 World Cup in Brazil, when his tournament ended with a back injury in the quarter-finals against Colombia. He had to be taken off the field on a stretcher, and Brazil ended up losing to Germany 7-1 in the semi-finals.

Neymar’s right foot has caused him problems in the past, being among the series of injuries he suffered since the 2018 World Cup in Russia. Another right ankle sprain led him to miss the 2019 Copa América that Brazil won.

Neymar has yet to win a major title with the national team. He helped the “Seleção” win the 2013 Confederations Cup and its first Olympic gold medal at the 2016 Rio Games.

With 75 goals for the national team, he is two shy of Pelé’s scoring record.

Denial of responsibility! Neefina is an automatic aggregator around the global media. All the content are available free on Internet. We have just arranged it in one platform for educational purpose only. In each content, the hyperlink to the primary source is specified. All trademarks belong to their rightful owners, all materials to their authors. If you are the owner of the content and do not want us to publish your materials on our website, please contact us by email: [email protected] The content will be deleted within 24 hours.
Previous ArticleThe best Black Friday washer and dryer deals you can still get
Next Article Miami nightclubs mourn absence of high-rolling crypto entrepreneurs